How To Use Memes For Marketing

While using memes for marketing can be one of the best ways to go viral, there are a few basics to know if you want to hit the right notes with your audiences.

In 1991, “viral” was used almost exclusively to describe the rapid transmission of a cold or flu from person to person. These days the concept is more or less the same – except now, it’s a phrase that’s been widely adopted by digital marketers, influencers and the many everyday users of social media. For the uninitiated, “going viral” is a term commonly used to describe a piece of content that is rapidly shared across the internet at unprecedented or unexpected levels. While the exact qualifying number of likes, shares or follows it takes to go viral varies depending on who you ask, it’s often used to describe a fast moving virtual phenomenon along the lines of Baby Shark, the #OkayBoomer phrase, and of course, a range of widely adopted and beloved memes.

Meme culture is pervasive on social media, and it makes sense that brands would want a cut of all that potential engagement. However, if you’re a business trying to make your mark online, using memes for marketing can be a dicey experience. Get it right, and your audience members will ideally laugh, care more about your future posts, and ultimately think of you as somewhat hip and relevant. Get it wrong, and you risk your efforts falling flat and potentially alienating the loyal fans that you’ve worked so hard to accumulate.

As most of us know, memes are synonymous with humour, but how can businesses from any sector or industry use memes for marketing as a means to boost your brand engagement?

The Basics Of Using Memes For Marketing

Oddly enough, the very phrase “meme” was first used way before the days of Facebook or Twitter. In 1976, Richard Dawkins wrote a book called “The Selfish Gene”, at which points he used the word to describe the way that a cultural trend can spread. While it may not have been directly referring to an amusing digital image or graphic that we know the word to describe now, the sentiment and general concept is still more or less the same.

In today’s digital world, a meme typically features a text or phrase added over the top of an existing image, whether it’s something from social media or a popular character. The message is used to highlight something either humorous or relatable about the image, generally in a form of social commentary in a self-deprecating style. Although the topic can be serious, it’s presentation is in a format that’s easy to digest by the general public.

While this decade’s most popular memes have varied anywhere and anywhere between “Grump Cat” and Willy Wonka, mastering memes for marketing purposes is slightly more complex. First and foremost, it’s success is directly tied to how well you know your audience. Memes are all about creating engagement and a sense of community, by communicating a message that everyone in your circle or inner sanctum understands. Fundamentally, memes for marketing are a way to develop a sense of belonging, something platforms like Facebook and Instagram have been all too aware of for close to a decade. After all, who isn’t fond of a well executed inside joke? 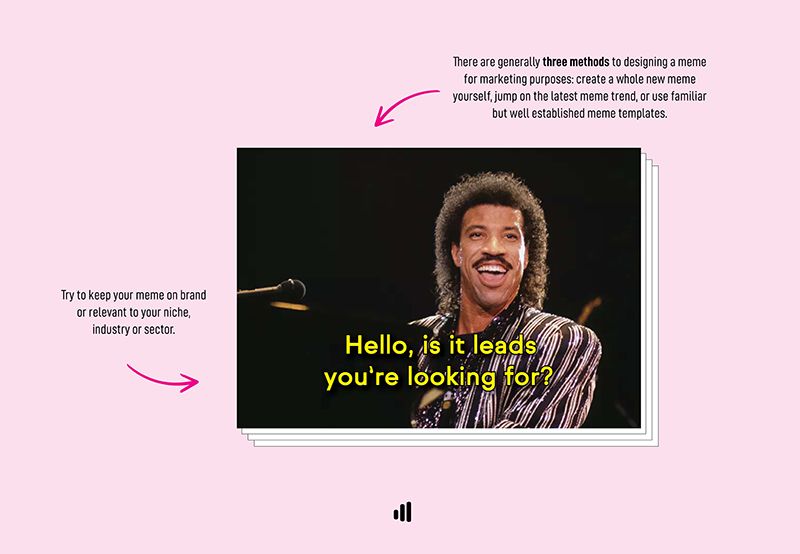 There are generally three methods to designing a meme for marketing purposes: create a whole new meme yourself, jump on the latest meme trend, or use familiar but well established meme templates. Memes are a great way to add spice and variety to your social media channels, but your customers might get a shock if you have a sudden change when it comes to your brand’s tone of voice. As a result, try to keep your meme on brand or relevant to your niche, industry or sector. Don’t try to purposefully shock or offend anyone, but instead approach the task like you’re sharing a private joke.

Memes are certainly not what we would usually call evergreen content, so if you’re stuck for inspiration, all you need to do is check out what’s currently trending on social media platforms like TikTok, Twitter and even LinkedIn. In particular, the latter can be of great help if you’re not sure how to strike the balance between professionalism and humour.

Since more than four billion people around the world are using social media every day, it’s safe to say that this trend isn’t going away anytime soon. On top of that, these four billion users distribute their screen time across an average of 6.6 social media platforms or apps per month.

If you’re a business trying to capture the attention of at least some of those four billion people, it can be difficult to get the right type of attention in what is a very crowded marketplace. Your content needs to be original, yet on brand, relevant and engaging. If your social media and overall content strategy is starting to get a little stale – or is even non existent – then it might be time to consider outsourcing the task to the professionals.

Producing quality, consistent and on brand content that’s Google friendly takes time, effort, experience and resources – and you’re not alone if you can’t quite commit to that. Avoiding the use of content marketing altogether may actually be doing your brand a disservice, but thankfully – investing in a solid strategy has never been easier.

We believe that this model means we can produce high quality content in faster than normal delivery times. It also means that because you have a monthly credit, you are going to want to make sure you use these up – and so do we – meaning that your digital content is always consistent.

If you aren’t quite sure where to start on your digital marketing journey and would like to speak to a professional, why not book a free discovery call with us at Content Hive today to discuss how we can get your brand buzzing online.